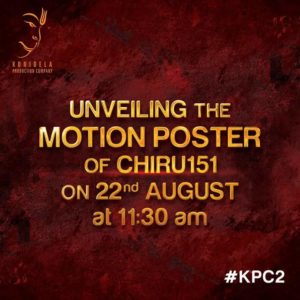 Konidela production No 2 with Megastar’s 151 movie grand launch under the direction of stylish maker SurenderReddy happened finally , with the launch lot of interesting facts got revealed like for the first time Nayanthara is going to romance Chiru and BIG-B Bollywod shehansha Amithabachan is acting in this mega movie

As per reports the  star cast is having some other popular figures like SuperStar RajiniKanth in cameo role , VijaySethupathi , Kicha Sudeep is going to play some important roles which is not officially addressed ,for this mega project AR.Rahman might compose tunes

Movie is planned with huge budget about 150 crores which will be released as multilingual (Telugu,Tamil,Hindi and Kannada)