Trending
You are at:Home»SpotLights»Megastar attends Teja’s next with Vinayak 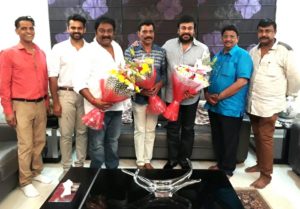 Commercial director V.V.Vinayak resumes his next movie with Sai Dharma Teja after a small break  , Lavanya tripati is going to do the female lead and for this special combination Megastar appeared as guest to give his blessings , as per reports movie is slated to start rolling from first week of september and the movie is expected to be released by first half of 2018 .