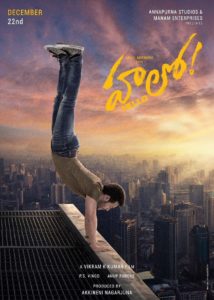 Akhil needs no introduction from his 1st year , As kid he scored blockbuster in the form of Sisindri but his debut as hero didn’t gave him success , So to say Hello  to success he joined critics best director Vikram K Kumar and titled the film name as Hello which is geared to release on December 22nd

Movies first look is revealed with Akhil in upside down which is not that appealing because it looks artificial anyways our Movie industry does always apposite to Physics and Improvises chemistry .

VIkaram K Kumar is known for executing interesting subjects , though the movie mentioned as Romantic entertainer it is clear from the poster that there is loads of action as well , lets wish Akhil gets a blockbuster this time .